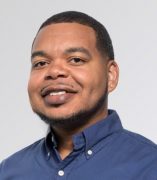 Darius Bost is Associate Professor of Black Studies and Gender & Women’s Studies, and the co-principal investigator of the Provost’s Initiative on the Racialized Body. He is also co-editor of Frontiers: A Journal of Women Studies. His research focuses in the areas of black literary and visual cultures; feminist, gender, and sexuality studies; African American and LGBTQ histories; and medical humanities.  Bost is the author of the award-winning book, Evidence of Being: The Black Gay Cultural Renaissance and the Politics of Violence (University of Chicago Press, 2019). Related research has been published in Criticism, Frontiers, Journal of American History, Journal of West Indian Literature, Occasion, Palimpsest, Souls, The Black Scholar, and several edited collections. His research has been supported by the Hutchins Center for African And African American Research at Harvard University, the Eccles Centre for American Studies at the British Library, the Woodrow Wilson Foundation, the Center for the Study of Race, Ethnicity, and Gender in the Social Sciences at Duke University, the President's Office and the Office of Research and Sponsored Programs at San Francisco State University, the Martin Duberman Visiting Scholars Program at the New York Public Library, and the Provost’s Office at the University of Pennsylvania. Bost is currently at work on two book projects: 1) an interdisciplinary study of queer visual cultures of the black Atlantic from the 1970s to the present 2) a black queer history of the United States (co-authored with C. Riley Snorton) for the ReVisioning History series at Beacon Press.