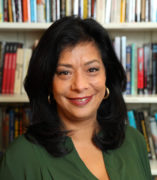 Gender and Women's Studies; and Latin American and Latino Studies

Elena Rebeca Gutiérrez is an Associate Professor in Gender and Women's Studies and Latin American and Latino Studies at the University of Illinois, Chicago. Dr. Gutiérrez earned her PhD in Sociology from the University of Michigan in 1999 and is a scholar of Latina/o Health, reproductive and sexual health politics, gender and social activism. She was most recently a fellow at the UIC Great Cities Institute where she developed a community-based rubric of research on Latina reproductive health.

Her current research focuses on the history of Latinas in the birth control movement, the politics of Latina health in Chicago, reproductive justice for Latina youth, mental health, and the effects of immigration reform on healthcare access. Her book publications include Undivided Rights: Women of Color Organize for Reproductive Justice with Jael Silliman, Marlene Gerber Fried, and Loretta Ross (Boston: South End Press, October 2004) which was the Recipient of the 2005 Gustavus Myers Outstanding Book Award in the area of bigotry and human rights, and Fertile Matters: The Politics of Mexican Origin Women's Reproduction (University of Texas Press, forthcoming January 2008). Fertile Matters documents the involuntary sterilization of Mexican-origin women in Los Angeles in the 1970s and illuminates the ways in which political, social and racial anxieties shaped the construction of the "problem" of Mexican origin women's fertility and reproduction.