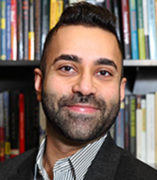 Ronak K. Kapadia (he/him) is Associate Professor and Director of the Interdepartmental Graduate Concentration in the Gender and Women’s Studies Program and affiliated faculty in Art History, Global Asian Studies, and Museum & Exhibition Studies at the University of Illinois Chicago. His interdisciplinary research engages critical ethnic studies, transnational queer and feminist studies, visual culture and performance studies, and critical studies of US empire and the national security state. Dr. Kapadia’s first book, Insurgent Aesthetics: Security and the Queer Life of the Forever War (Duke University Press 2019) was awarded the 2020 Surveillance Studies Network Best Book Prize. Insurgent Aesthetics theorizes the queer world-making power of contemporary art responses to US militarism in the Greater Middle East. It examines the race-radical queer feminist visions, sensations, and freedom dreams of transnational South and Southwest Asian visual art and aesthetics in the context of contemporary US global state violence and its forever wars of security and terror in the Greater Middle East. Kapadia is co-editor of the special issue of Surveillance and Society on race and surveillance (2017) and his writing appears in numerous academic journals, edited volumes, and art catalogs. Finally, Kapadia is at work on a second book-length project, Breathing in the Brown Queer Commons, which examines queer and trans migrant futurisms in visual culture and performance art to develop a critical theory of healing justice and pleasure in the wilds of ecological chaos and US imperial decline.

Dr. Kapadia has been pursuing wider creative outlets for this scholarship to invite broader publics. This includes co-organizing a virtual seminar series (2020-2022) on the reciprocal politics of “bed space activism” across contemporary social movements for disability justice, migrant justice, and abolition feminisms funded by the Mellon Humanities Without Walls Program. Currently, Dr. Kapadia is a lead project director and co-curator of Surviving the Long Wars, a multi-sited public humanities collaboration with the emerging Veteran Art Movement that explores the intimacies between the two “forever wars” in US history—the 18th and 19th century US “Indian wars” and the 21st century “global war on terror.” Funded by the National Endowment for the Humanities, Surviving the Long Wars explores the multiple, overlapping histories that shape our understanding of warfare, as well as alternative visions of peace, healing, and justice generated by diverse communities impacted by war. The project includes a virtual scholarly seminar series at the nexus of critical ethnic studies, native/Indigenous studies, and Middle Eastern Studies on the histories and futures of Native rebellion alongside contemporary US militarism and warfare. The project culminates in the second Veteran Art Triennial & Summit in Spring 2023, at the Chicago Cultural Center, Hyde Park Art Center, and Newberry Library.

Dr. Kapadia is on the National Council of the American Studies Association (2020-2023) and the Advisory Board of Verge: Studies in Global Asias (2022-2025). He has held leadership positions with the Association for Asian American Studies (2010-2012) and co-convened the Newberry Library's Scholarly Seminar on Gender and Sexuality (2018-2020). Outside of academia, he served on the board of directors of FIERCE, working to build the leadership and power of queer and trans youth of color in NYC.

National Endowment for the Humanities Dialogues on the Experiences of War Grant (2022, $100,000, Shared-PI)