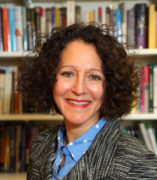 Norma Claire Moruzzi received her PhD in Political Science from the Johns Hopkins University. She is Associate Professor of Political Science and Gender and Women’s Studies, with an Affiliation in History, and Director of the International Studies Program and Chair of the Middle East and Muslim Societies Cluster at UIC. She is also a member and past chair of the editorial committee of the journal Middle East Report.

Prof. Moruzzi’s research and teaching address the politics of social identity, with particular emphasis on the intersection of gender, religion, and nationalisms. Trained as a political and social theorist, she also makes use of archival and ethnographic methods in her scholarship and in the classroom. Her first book, Speaking through the Mask: Hannah Arendt and the Politics of Social Identity (Cornell University Press: 2000) won the 2002 Gradiva Book Award. She has published on women’s and gender issues and cinema in Iran and the Middle East, as well as contemporary and historical issues of the politicized discourses of gender and identity in global context. From 1998-2008 she regularly conducted field-work in Iran, while also participating in and conducting workshops for women’s groups and contributing to local journals. She is currently working on a book analyzing transformations in Iranian women’s lives since the 1979 Revolution, titled Tied Up in Tehran: Women, Social Change, and the Politics of Daily Life.